Here at Florida Maine Coons by OptiCoons we like to protect the Maine Coon breed standard. Maine Coon cats are a distinctive breed and North America's oldest natural breed. They are often referred to as gentle giants due to their larger than average stature and gregarious temperament. Males typically weigh from 15 to 25 lb and females weigh from 10 to 15 lb. Unlike regular cats that take about a year to reach full size and maturity, Maine Coon cats take 3-5 years to complete their growth. Their bodies are sturdy, muscular and rectangular. Their coat is long, silky and flowing with a heavier weatherproof topcoat and soft undercoat. Their ears are large and heavily feathered to prevent snow from gaining entry. Often they are tufted on the end with a lynx tip that is desirable within the breed standard. Their feet are large and heavily tufted on the bottoms to provide them with a snowshoe capability over snow. Maine Coons have long, full and bushy tails making them ideal for wrapping around their bodies for additional warmth. The breed includes all colors with the exception of pointed colors like the Siamese. Their eyes are large and wide set and can be shades of green, gold or copper, although white cats are permitted to be blue or odd-eyed.

The Maine Coon cat is notorious for their people oriented nature and many owners compare them to dogs in that regard. They are intelligent and playful cats, many can even be taught to fetch and perform other tricks! They most certainly are not the typical aloof and independent house cat so do be prepared to spend time with them. If you will be away from home a lot of the time it would be prudent to consider getting a pair at the same time. Then they have each other as companions and it is definitely twice the fun for you to watch their antics!

ORIGINS OF THE MAINE COON

The origin of the breed is largely speculated about because there is no certain history of the Maine Coon. The theories range from the ridiculous: mating of cats with raccoons, a genetic impossibility; to the slightly less preposterous notion of cats mating with bobcats, genetically possible but unlikely. The most plausible theory is that Europeans traveled over on ships with cats on board to control the rat population and for company. The Vikings of the 11th century were known to travel with Norwegian Forest cats on board their ships and they bear a strong resemblance to the Maine Coon cat. Although not generally as large a cat, they share many physical characteristics. The harsh nature of a New England winter and many natural predators may well have made it a case of survival of the fittest, hence only those cats that were larger were able to thrive and perpetuate the breed.

There are also folk tales surrounding the origin of Maine Coons. One such tale says that a ship captain named Samuel Clough attempted to assist Marie Antoinette to escape execution in France, loading his ship with her treasures including six of her favorite Turkish Angora cats. Although she was put to death, the story goes that Captain Clough brought her cats to Maine and they bred with the local cat population, creating the Maine Coon breed.

Another folk tale involves Captain Charles Coon, an English sea captain who ran a trading business up and down the coast of New England, who was reputed to be an ardent cat lover who traveled with many cats on his ship, many of them long-haired cats that stood out to the local population. He brought them onshore as an entourage and invariably long-haired cats started showing up in the litters of local cats as a result. These cats were referred to as “Coon’s cats”. The story goes that these cats were then encouraged to breed and hence the birth of the Maine Coon cat breed. Today, Maine Coons are among the most popular pedigreed cat breeds in the USA, and they can be found in homes and cat shows from Hawaii to Florida.

There are two known genetic problems that Maine Coons are predisposed to, HCM and hip dysplasia, but reputable breeders are working diligently to flush these problems out of the breed. HCM is a disease of that causes thickening of the heart muscle and ultimately leads to congestive heart failure and occasionally even sudden death. Hip dysplasia is a painful hereditary condition that involves degeneration of the hip joints. More and more breeders are screening their breeding stock for this condition. This is by far the most important reason to avoid back yard breeders. If a breeder is advertising cats without papers and a pedigree, walk away. It is inexpensive to register cats with any of the breeding associations and if a breeder isn't doing so, there is a reason. The breeding cats are in all likelihood not full Maine Coons and almost assuredly not genetically screened for HCM. This is also an inexpensive test so all breeding stock must be screened for it. If your kitten’s parents are both negative for the known mutation in Maine Coons, your kitten will also be negative for the gene. Florida Maine Coons by OptiCoons considers itself a professional breeder with ethical standards that say we must have our Maine Coons tested if they are going to be breeders, we test them for HCM, SMA, PKdef and PK, these tests are not cheap to run BUT they are vital to carrying on a clean bloodline. We believe in testing and do not skimp on the health of our bloodlines. 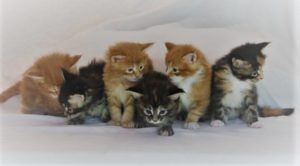 Reputable breeders in North America will charge between $600- $3000 for a pedigreed kitten with papers. The upper end of the scale is what you can expect to pay for show quality and the lower end for pet quality. Some breeders will charge even more for kittens of show or pet quality from champion lineage. If you are seeking breeding rights as well you can often expect to pay closer to $4000 for a top quality breeding cat. Here at Florida Maine Coons by OptiCoons, its not all about the money, our kittens will average $1350.00 and up.

As good breeders we will have raised her kittens “under foot” and this is something you want to look for, as well as the age that they will allow you to adopt your kitten, most commonly at 12-14 weeks of age. These cats will already be accustomed to living with people and will tend to be well socialized. Any good breeder recognizes that any earlier age is detrimental to the kitten’s health and development. Reputable breeders will have you sign a contract indicating which registration body the kitten and parents are registered with, offering a health guarantee that gives you peace of mind that the kitten is healthy at the time you pick it up, often there will be a no declawing policy clause as well. Many breeders will spay or neuter before they release the kittens, although some will require you to have the procedure done before they will release their pedigree papers to you, this is the policy of Florida Maine Coons by OptiCoons. Your kitten will have had the first two sets of vaccination performed before you pick up your kitten. We will usually provide you with a sample of the food that the kitten has been weaned onto so that you are able to continue feeding it or can use it to transition gradually to the food you choose to feed.

You should consider, above all else, only kittens that are clearly healthy. They should be alert and eager to play with people and other kittens. There should be no discharge from eyes or nose and no sneezing as this can indicate illness. Ensure that their ears are clean and free from wax or black debris as this likely indicates an ear mite infestation which is readily treatable and a reputable breeder would already have done so. Your purchase agreement will include a clause requiring a veterinary health check-up within 48- 72 hours of your taking possession. If your vet detects a health problem a reputable breeder will assume responsibility for the expenses that ensue for treatment and/or offer the return of the kitten per the health agreement in your contract.
Male and female kittens tend to differ slightly in the personality department. While both are similarly affectionate, males tend to be more clownish, even past kittenhood, and females more dignified and territorial especially as they mature. This can make introduction of a new cat more difficult with a female than a male so consideration should be given to this factor when you are deciding whether or not to get more than one cat initially. Cats that are close in age will be at the same stage of development physically and socially. They will thus share similar interests and have a tendency to bond more quickly and closely.