Here’s an email update from a customer of Florida Maine Coons and her new Maine Coon Kitten Bentley. This is why we do what we do, ethical breeding with proper matches produces high quality Maine Coon Kittens. 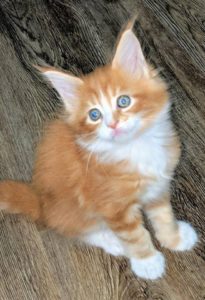 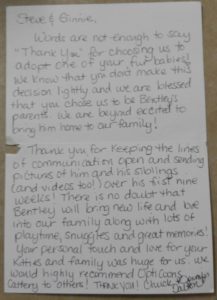 Yes he is!  He’s as cute as ever, so loving and sweet, and he prays when he eats by sitting straight up with his butt on the floor and his paws raised to chest level in the praying position if we give him a little piece of chicken or egg.  He maintains that position until he is finished eating then sits back down.  We want to try to capture this on camera and send it to you, but you know how it is; very difficult to do because the little guy moves so quickly.  He’s quite protective over his food because if you get to close to it like you’re going to take it away, he’ll growl in his little kitten voice.  lol  Also….and this is one of the things we love so much about him, he has slept with us every single night since we adopted him.  The very first night he slept right next to my pillow between my pillow and the edge of the bed.  Ever since then, he sleeps between mine and Chuck’s pillow, right in the middle.  Most of the time, we’ll bring him to bed each night, but last night, he needed to play a little more and then he joined us to sleep about five or ten minutes later.  He sleeps the entire night.  He’s an incredible doll baby and we love him so very much!  Sometimes I want to pinch myself to make sure I’m not dreaming!  Also, he and Turbo are crazy about each other and they like to do everything together.  Bentley is Turbo’s Minnie Me or “Thing 1 and Thing 2”.  Every day when I get home from work, Turbo stands up on his hind legs and asks to be picked up, so I do that, and now Bentley wants the same, so they have to take turns.  I can barely set my purse and keys down before they want to be picked up.  Bentley may be tiny, but he’s fierce, and he demands the attention.  I love it!  He’s still an equal opportunity snuggler and he has to have time with everyone in the family.  We had to separate the two of them during meal time because Turbo can’t transition to Bentley’s diet yet due to the problems he had last week/weekend.  We have to wait a while to make sure he’s totally over his intestinal issue.  However, Bentley’s desire to eat the Royal Canin Pâté has gotten better and he’ll eat between 1-2T. daily.  Used to, he would eat a little of it, but he mostly wanted the dry Royal Canin.  Now he eats both!  So…that’s my update for this past week.  Sorry it took so long to fill you in.  I hope you and your family are well (including all your fur babies)!  ?

Have a great day!